Junior League of Northern Virginia (JLNV) past-president Janet Kerr-Tener was honored by Supervisor Linda Q. Smyth of the Fairfax County Board Supervisors with the “Lady Fairfax” award for the Providence District. The award recognized Kerr-Tener’s volunteer work, including with the JLNV. The Lady Fairfax award is presented yearly to honor two volunteer leaders from each Magisterial District for their outstanding volunteer service in their home districts or for an act of heroism. 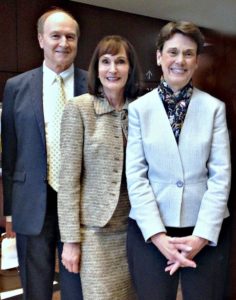 accomplishments have benefitted Fairfax County for more than two decades. Janet’s love for her community continually touches lives of residents, whether as president of the Junior League of Northern Virginia or through her work on the Volunteer Fairfax Board, Hunter Mill Road Traffic Calming Committee, and the Library Foundation Board, which she chaired and is still a member. Janet founded the Friends of Oakton Library, and she recently started the Greater Oakton Community Association to create a vision and sense of place for Oakton.”

Fellow JLNV Past President Deborah Brittain welcomed the news of Janet’s award with these comments: “It is no surprise to many that Fairfax County would award Janet Kerr-Tener one of its highest community service honors. Since I met her nearly 35 years ago as a Provisional Member of the Junior League of Northern Virginia, she has been the model civic leader who has always been ‘ahead of her time’ in understanding and crafting a plan of action to approach and solve some of the thorniest issues of the day. It was Janet who introduced to the JLNV the concept of ‘strategic planning’ in 1988. Who knew then that it would result in the League adopting an aggressive plan to tackle homelessness in Northern Virginia before the community even acknowledged that it existed as a challenging problem in the area. Janet’s unflappable, focused, relentless, savvy and unwavering commitment to forge change and to impact a cause is core to her spirit and value as a community advocate, a collaborative leader and agent of civic responsibility.”